Russia before Accession to the WTO

After 18 years of negotiations, it is possible that August 2012 could be the date when Russia, as the last of the major international economies, accedes to the World Trade Organisation (WTO). The WTO member states and Russia reached this agreement in Geneva in the middle of December 2011. The protocol of accession has been signed. Now only the Russian parliament has to agree, and pursuant to WTO regulations, it has exactly 220 days to do so, namely until 22 July 2012. 30 days after ratification, Russia would automatically become a full member of the WTO. 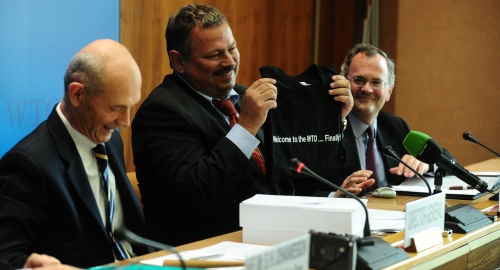 A T-shirt on occasion of the accession: Russian chief negotiator Maxim Medwedkow is happy about the successful completion of the accession negotiations. On the left, WTO General Secretary Pascal Lamy. (Photo: WTO/Studio Casagrande)


For Russia this means considerable obligations concerning the reduction of trade barriers. From the day of accession, the country must implement the comprehensive WTO regulations and must open its domestic market to foreign goods and services. The average maximum limit for import duties on all products will be lowered from the current 10% to 7.8%, for example, for automobiles from 15.5% to 12% and for electrical machinery from 8.4% to 6.2%. The state subsidies for industry and agriculture must be cancelled or significantly reduced. Further good news for western companies is the fact that with its accession to the WTO, Russia also accedes to the “Agreement on Trade-related Aspects of Intellectual Property Rights” (TRIPS), which offers foreign companies a legal right to take action against product piracy and bootleg copying. By acceding to the WTO, Russia also recognises the arbitration mechanisms defined in the agreement. This means that Russia - and also the other member states - can take legal action against the violation of the regulations. Experts assume that this will lead to greater legal security for investors, which in turn will bring about additional investment incentives.

Good long-term growth prospects are expected for the Russian Automotive market, the market for chemical products and for machines, which is why European, and mainly German, companies should see positive results from the accession of Russia to the WTO. The EU is Russia’s most important trading partner. Exports from EU countries in the amount of a good € 85 billion stand vis-à-vis imports from Russia in the amount of just under € 160 billion in 2010. When it comes to foreign investments, the EU is ahead, as well. The EU Commission estimates that up to 75% of foreign direct investments in Russia comes from EU member states.

Despite its numerous obligations, Russia should benefit significantly from its accession to the WTO. In his 2008 report, David Tarr, former Chief Economist of the World Bank, assumes an additional total growth of 4.3% of the Russian GDP due to the WTO accession. He expects the greatest growth impulses from the opening of the service sector to foreign direct investments. Russia has agreed to lower or completely eliminate the investment barriers for foreign telecommunications and transportation companies as well as for banks and insurance companies. However, some of these obligations are subject to a transition period of up to nine years. Thanks to the greater investment security, the continuing capital drain in the amount of US $ 85 billion (converted) in 2011 alone could finally be stopped, writes the Eastern commission of the economic magazine Deutsche Wirtschaft in its dossier on Russia’s WTO accession. In contrast, Tarr assesses the growth effects through improved market access for Russian companies and the cancellation of subsidies in other countries as marginal at best. As Russia has negotiated most favoured nation clauses with nearly all its trading partners, the WTO accession will hardly lead to changes in this regard.


While export-oriented Russian companies, for example, those positioned in the iron and nonferrous metals industry or the chemical industry, are expected to benefit from a better integration of Russia into the world economy, the food industry or the Russian machinery and automotive sectors will experience significant pressure in future. Not only must they deal with the reduction or cancellation of subsidies and protectionist measures, but they must also compete more and more against foreign competitors. For some sectors, including the automotive, aeronautics and food industries, Russia has been granted transition periods of up to eight years before it is expected to fully comply with the WTO regulations. For example, preferential duties and customs exemptions for domestic automobile producers are allowed until 2018. While some branches are raising the spectre of unemployment, the optimists amongst the experts believe that in the long term increased competition will force Russian companies to modernise, which in turn will improve the overall level of competitiveness of the Russian economy on the world market.

However, the possibly largest growth potential lies somewhere else. In December 2011, the OECD criticised yet again the bad economic framework conditions as an ongoing handicap for higher economic growth. The Eastern commission of Deutsche Wirtschaft and the German-Russian Chamber of Commerce come to similar results in their latest survey amongst approximately 6,000 German companies in Russia. Federal bureaucracy and corruption are stated as being the largest problems in this survey, as well. In the World Bank’s “Doing Business“ index of 2011, Russia is ranked in 123rd position, i.e., seven ranks worse than in the previous year.

In February 2012, Prime Minister Vladimir Putin announced a package of measures to transform Russia into one of the 20 most attractive investment locations in the world. In particular bureaucratic processes shall be accelerated. Experts remain sceptical; after all, it is not the first time that one hears announcements of this kind in Russia.