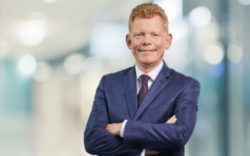 The competition, which is organized annually by manager magazine and HHL Leipzig Graduate School of Management, analyzes and ranks the reporting and investor relations activities together with the capital market performance of the 160 largest German companies in the DAX®, MDAX® and SDAX® indices. In the overall ranking, Klöckner & Co took fifth place. Guido Kerkhoff, CEO of Klöckner & Co, accepted the accolade at today’s award ceremony.

“Transparent financial communication is a top priority at Klöckner & Co. First place among SDAX® companies in the “Investors’ Darling” competition shows that we are successful here. On behalf of the entire team, I am delighted to accept this award and see it as an incentive to continue our successful work,” Kerkhoff said.

According to the jury, which is made up of recognized experts, the key to Klöckner & Co’s outstanding rating was the company’s interesting capital market story based on the combination of steel distribution and digitalization.

The competition has been staged since 2014 by manager magazine and HHL Leipzig Graduate School of Management. Its ranking is based on a comprehensive analysis of companies’ capital market communication according to several hundred criteria. The dimensions covered comprise reporting, investor relations and capital market performance, which is based on share price performance relative to the sector in the last three years and an investor survey.