Urban Mining: the city as a source of raw materials

Glass and paper have long since been recycled in Germany. But so far hardly anyone has concerned themselves with metals such as iron, copper, aluminium, gold or platinum. That is set to change: under the key phrase Urban Mining an increasing number of companies and initiatives are recognizing the city as a “Mine” from which raw materials can be reclaimed. According to the new philosophy, the materials are only periodically used in buildings, industrial facilities, mobile phones or computers and after they have served their purpose, can be recycled for other products. 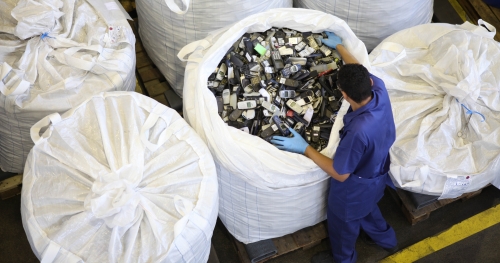 Most mobile phones collected are exported to developing and threshold countries as “Re-use” appliances. But the great majority of the appliances end up in peoples’ drawers or the waste bin. (Photo: Umicore AG & Co. KG)


“Urban Mining is more than just recycling. It describes an innovative concept, which structures the raw materials cycle as intelligently as possible”, explains Jörg Sommer, CEO of the German Environmental Foundation (Deutsche Umweltstiftung). He said that it already started with the design, which enabled the planning of subsequent raw materials reclaiming as efficiently as possible, in addition savings and avoidance play a great role. Calculations by the German Nature and Bio-Diversity Conservation Union (Deutscher Naturschutzbund) show that since 1990 materials recovery has cut CO2 emissions by 46 million tons – in other words the use of secondary raw materials is also advantageous for the environment.

The reopening of waste dumps is currently attracting particularly great attention. The majority of the so-called anthropogenous resources, in other words man-made raw materials dumps, are to be found in residential areas, the infrastructure and other long life-cycle goods such as electrical appliances. According to the Urban Mining Association, a share of around ten to twenty per cent is however to be found on waste landfill sites – and in view of the increasing waste volumes, as much of this is possible has to be collected and then recycled.

In this connection, scientists at Gießen University are conducting research into whether and from what point the opening of a waste mountain could be worthwhile. In particular the waste from the 60s and 70s, when the throw-away society was at its peak and recycling management was still an alien concept, are interesting aspects says Professor Stefan Gäth. The samples are currently being examined for their contents: if prices for the increasingly scarce raw materials continue to rise, the digging up of old waste dumps will soon become a profitable business. In the medium-term powerful new markets can be created from the merging of ecology and economy.

The politicians have now also recognized the significance of the material components dumps inhabited by people mainly in the big cities. But the new Waste and Recycling Act, which is to pave the way for the nationwide introduction of a recyclable materials bin, has still not been passed. The recycling of waste is a market worth billions, in which the local authorities and private waste disposal companies have already been fighting for access rights for a long time.

Currently, most of the waste ends up in one of the 70 mostly local authority-run waste incineration plants. “In view of the worldwide increase in resources consumption, integrating the raw materials contained in the waste into the waste recycling cycle and at the same time increasing resource efficiency, will be absolutely unavoidable in future”, says Federal Minister of the Environment Norbert Röttgen. Previously, domestic waste had a recycling quota of 64 per cent. Up to now, the rare or critical metals, which are mainly used in environmental technology and high-tech products, have hardly been recycled. Scientists are therefore looking for ways to reclaim them from smart phones, wind turbines, energy-saving light bulbs, light-emitting diodes, hybrid cars and catalytic converters.

PC circuit boards are complex components, which in turn are part of complex appliances. But once again, after sorting, dismantling and processing, precious and special metals can be recovered. (Photo: Umicore AG & Co. KG)


For many products raw materials recovery is so difficult due to their complexity. Christian Hagelüken from the Umicore Material Technology Group (Materialtechnologie-Gruppe Umicore), whose activities include recycling, explains: while glass only consists of one material, mobile telephones and other electronic appliances often contain “half the periodic table”. He said that in addition, the financial incentive for the technically complicated removal of the materials was often lacking: a mobile phone only has a total metal value of 1.20 Euro, Hagelüken has calculated.

But although the individual appliances only contain the smallest amounts of metals, when combined, they produce a significant total volume. The total quantity of around ten billion mobile phones sold so far contains approx. 2,500 tons of silver, 240 tons of gold, 90 tons of palladium – precious metals worth around 12 billion Euro. Removed PC circuit boards already have a positive net value, so recycling is worthwhile. Umicore can recover 17 different metals from this component, including 200 grams of gold per ton – in conventional mining there are only 5 grams of gold per one ton of ore. And future technologies such as electrical vehicles, fuel cells, LEDs or photovoltaics will lead to a further increase in demand for the valuable raw materials – and with it the price. Following the introduction of LCD screens, the price of indium increased by a factor 10.

Raw materials recovery at local level is also supported by the fact that often only a few countries have economically viable stocks of raw materials. 95 per cent of the Rare Earth Elements Group for example comes from China, which prohibits the export of raw materials through protectionism. Many materials are only offered by a handful of companies, who can force through targeted price rises. Two thirds of the freely traded iron ore for example comes from the mines of three suppliers. Sometimes, as is the case in the Congo, where tantalum is mined for condensers in mobile telephones, the mining countries are instable and investments uncertain.

It comes as no surprise then that an increasing number of companies are refocusing their attention on the concealed domestic raw materials depot at home. For example, phosphorous can be claimed from sewage sludge, which is indispensable in agriculture as a fertilizer component, but in the meantime is becoming scarce. Human beings discharge phosphorous with their urine – it can therefore be extracted from wastewater using crystallization. A pilot plant has already proved that therefore approximately 40 to 50 per cent of phosphates are contained in waste water, which can be used later for agricultural fertilizers. The sewage sludge can subsequently still be burnt – its energy value is almost as high as that of lignite.