The 2012 Congress focused on Urban Mining in the construction sector; this year’s Congress will centre on the challenges encountered when reusing residuals from tomorrow’s technologies such as from renewable energies. Here approximately 30 experts have already become involved as jury members, speakers or session chairs.

After all, it is precisely our technologies of tomorrow that use up raw materials whose limited availability raises questions as to their sustainability. Even today the first plants commissioned for the energy turnaround are ready for "disposal". What are the resulting challenges? How can technologies for the future be conceived so as to comply with sustainability laws? These and related questions will be discussed over the two days.

The URBAN MINING Award and the URBAN MINING Solutions Award were created by the board of the non-profit organisation URBAN MINING e.V. Both awards honour special merits and achievements in the promotion and implementation of a consistent and cohesive lifecycle approach and are designed to raise public awareness for smart and innovative ideas, concepts and strategies for closed-loop and environmental management.

In 2011 the first award went to Prof Dr Klaus Töpfer for his successful commitment. He was instrumental in passing the German Waste Management and Product Recycling Act (Kreislaufwirtschaftsgesetz) thereby creating the legal framework for innovations in the area of recycling.

2013 will see the first URBAN MINING® Solutions Award being presented. While the awards in the other categories go to individuals, the URBAN MINING® Solutions Award may be presented to institutions, enterprises, products and services devoted to the reclamation of raw materials, optimised raw material usage, avoidance of resource consumption by means of optimised products and processes and improved recycling that consider a conscious use of our earth’s natural resources. 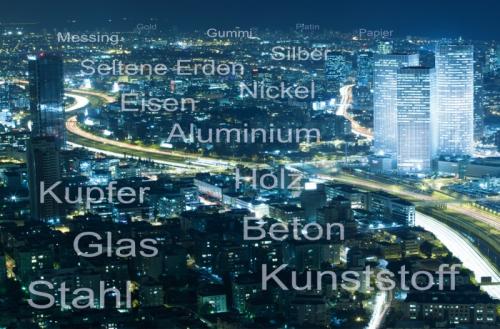 The lion’s share of anthropogenic resources is tied up in settlements, infrastructure and other durables – so-called anthropogenic deposit.

URBAN MINING e.V. stands for sustainable handling of all types of resources and in all areas. This includes both the reclamation of any waste produced with a view to reuse and a prudent use of finite resources and sustainable raw materials – in view of coming generations and the rising world population.

Against the background of ever scarcer primary raw materials URBAN MINING e.V. has its sights on the optimum reclamation possible of all resources used. Furthermore, URBAN MINING e.V. promotes the exploration and categorisation of anthropogenic resources. The organisation lists approx. 40 members from several European countries.

WHAT EXACTLY IS URBAN MINING?

Urban Mining is about solutions for putting raw materials from cities to productive use again. Copper is a particularly striking example. Here, the resources in urban use already exceed the earth’s natural deposits. This situation is expected to affect other materials in future, too. This trend is reinforced by further developments in technology, demographic trends and increasing urbanisation.

The underlying idea of Urban Mining is to achieve a never-ending life cycle of use and reuse and/or reclamation. But there is more to Urban Mining than mere recycling. It is a concept for recovering raw materials that takes the entire life cycle of products of all magnitudes and, hence, also of all so-called anthropogenic resources into consideration.

A relevant feature for distinguishing these two types when looking at urban mines – in terms of a life cycle analysis – is the time elapsed from the point where these mines release their resources to the time where the raw materials “tied up” in consumer and producer goods are available again. Here, the various “deposits” can be broken into long and short-term mines depending on the period of use. Standard packaging and small electrical appliances are assigned to the short-term urban mines, while infrastructure and buildings are assigned to the long-term ones.

There are also marked differences among the various mines relating to the density of resources deposited there and the effort required to use these secondary raw materials. This in turn depends on the degree of impact the previous consumption had and the revenue that can be generated from it.

Urban Mining includes the identification of such anthropogenic deposits, the qualification of the secondary raw materials and the assessment of their efficiency. The latter depends on the technologies currently available for recovery and the forecasts on current and future revenue.

More than a Congress – an Expert Community

"It is moving to see how experts support us in organising the event or as speakers, jury members and facilitators,” says Rainer Weichbrodt, board member of Urban Mining e.V., and adds “It’s a highly multi-disciplinary community consisting of architects, urban planners, construction engineers, logistics experts and business people.”

The number of supporters has now also increased internationally and strong commitment to implementing Urban Mining is emerging. Rainer Weichbrodt is satisfied: “We have seen the concept of Urban Mining has now become mainstream and is therefore also grasped by the public at large.”

EU and the Free Trade Agreement

The EU, USA and Japan have taken formal negotiations for free trade agreements. The EU Member States are hoping impetus for their economic growth. But opponents of the Agreement doubt that Japan will really open its market.