A large proportion of electric power will soon be provided by wind and solar energy. The problem is that the energy output of those sources is subject to major fluctuations. Sometimes there’s a stiff breeze on land and on sea, and sometimes many turbines just grind to a halt. There are times when the sun keeps shining for days and days, and there are others when it’s continually hidden behind the clouds. In the future, therefore, far more excess eco-power from energy-rich days will need to be stored and thus made available at other times. One possible solution is offered by the gas network.


The new idea which is currently being analysed for technical and commercial feasibility has been dubbed “Power to Gas”. Using surplus electricity, water is first split into oxygen and hydrogen in a process of electrolysis. Next, the resulting hydrogen is converted to synthetic methane, in other words: natural gas. This product can be used throughout the world of gas, with its infrastructure of networks, gas stores, heaters and power plants. Whenever required, gas from renewable resources can be turned into electricity again or indeed used directly for the purpose of heat or fuel.

In principle, the biogas could actually be stored on site, but this would mean setting up large new gas-storage facilities near the generators, as the existing ones are rather too small. A better option would be to use the gas network which has an immense storage capacity, covering a length of some 400,000 kilometres. It is therefore ideally suited for the long-term storage of bioenergy, says Prof. Jürgen Schmid, head of the Fraunhofer Institute for Wind Energy and Energy System Technology (IWES). The German Technical and Scientific Association for Gas and Water (DVGW) maintains that even greater volumes could be stored simply by changing the pressure within the gas network. 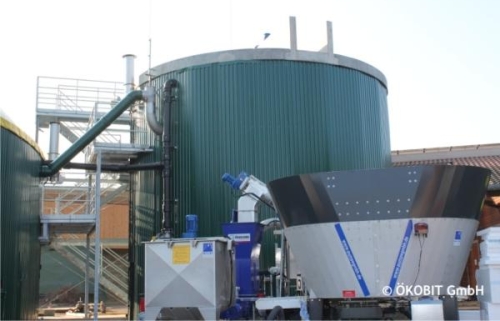 
A technology is currently under development for biogas plants whereby bioenergy is produced from the fermentation of waste, liquid manure or energy crops. However, this technology also allows energy intake from the grid. “This would allow an effective form of energy management that will ease the burden on electric power grids,” says Schmid whose institute is currently working on the project – the Centre for Solar Energy and Hydrogen Research in Baden-Württemberg (ZSW). The new technique is to be used not only in a few new large-scale plants but also in conventional biogas plants.

The German Association of Local Enterprises (VKU) points out that this will help to ensure a secure and sustainable energy supply. Otherwise, says Hans-Joachim Reck, CEO of VKU, any unused surplus from the production of wind power will be lost through a limitation of output. During a storm and at the height of summer the power plants produce too much green energy which the overloaded grid is then unable to distribute in the best possible way. Quite a few wind turbines, especially in northern Germany, therefore need to be put on hold. The German Wind Energy Association (Bundesverband Windenergie) reckons that this led to the loss of 150 gigawatt hours in 2010.

This has also been recognised by political decision-makers: The German federal states of Hesse and Thuringia have invested a total of EUR 600,000 in research and in the construction of pilot facilities, run by IWES and ZSW, designed to store renewable methane. Running under highly realistic conditions, the 25kW research facility in Bad Hersfeld is to show the reliability, method of operation, efficiency and potential exploitation of methane. According to Jürgen Reinholz, Minister for the Environment in Thuringia, mechanisation has been known for quite a while, but until recently there hasn’t been enough electricity to apply this method on a large scale.

But there are also other storage options for surplus energy from renewables. For many decades short-term compensation has already been provided by pumped-storage power plants, with an efficiency level of over 80 per cent. However, their expansion in Germany has been limited by geographical constraints, and their capacity is insufficient for any long-term slack periods. According to the energy supplier RWE, experts have worked out that today’s pumped storage plants – about three dozen in all – can only cater for a lean spell of a few hours. If there were no wind at all for several days and at the same time a thick layer of clouds, the only way Germany could survive without importing electricity would be by using the entire volume of Lake Constance for the production of electric power.

“To compensate for long-term fluctuations that last several days or weeks, the only option would be to use chemical stores based on hydrogen, methane or other gases or liquids,” says Schmid from the Fraunhofer Institute (IWES), as he comments on his simulations. With fuel cells it would even be possible to produce renewed electricity from hydrogen – and in fact without any detour via methane. But the required infrastructure is insufficient for this purpose.

Many experts believe that “Power to Gas” has the greatest potential. There’s only one snag: The necessary conversion processes cause a lot of heat loss, so that the efficiency of any subsequent reconversion to electricity is no more than 36 to 38 per cent, according to the Fraunhofer Institute (IWES). However, if the resulting thermal energy could be used in these processes, then their efficiency level would be the same as for pumped-storage power plants: 80 per cent.

Thomas Bareiss, Energy Policy Coordinator of the CDU/CSU parliamentary group in the German parliament, believes that “Power to Gas” will soon add a further component to the Smart Grid. And there is some urgency: Today’s electric storage capacities of 0.5 kW p.h. will need to increase to a double-digit figure by 2030. Bareiss is confident that “storage technologies are a decisive component for the success of an energy turnaround”.