Topic of the month Dezember 2011

Digitalised data and electrical energy speed through the ocean in submarine cables. A mighty network of high-performance submarine cables transports quantities of telephone conversations, delivers cable TV and speeds up the Internet. The world is growing smaller – and requires more and more transmission capacities as a consequence. Existing connections must be expanded, and new regions must be connected to the data flows. The ocean floor also houses cables for energy transmission. Some of these cables transport energy from advanced offshore wind power plants to the mainland, others connect islands as well as oil and gas production plants to the energy grid. 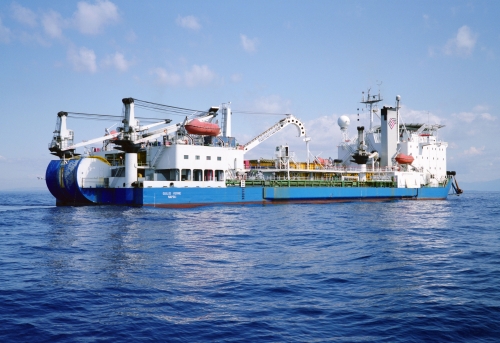 During the deployment of the cable, which is being uncoiled from a ship, it is exposed to extreme stresses. Once on the ocean floor, there is still a risk of damage through debris or ship anchors. Therefore, submarine cables are protected with special metal sheaths that are fortified using a particularly stable and tear-resistant Freudenberg fleece material, which is also impregnated with bitumen. All in all, three different fleece materials from the Freudenberg product line are being used on the cables between Sardinia and the mainland. (Photo: Freudenberg Vliesstoffe)


Until recently, two diesel generators were running on the German Island of Helgoland. The 1,300 inhabitants of Germany’s only deep-sea island got their energy from these geriatric machines whose smooth operation could not be guaranteed. In addition, they burned nearly seven million litres of diesel per year. Enter the cable-laying barge "Nostag 10”, a 90-meter-long specialised ship, equipped with a crane and cable-laying facilities, that connected the island to the European power grid. Now, 5,000 kW are available at all times.

To install the nearly 52 kilometre-long submarine cable, the ship had to create a trench in the bottom of the North Sea using so-called “jet ploughs”. The 10-centimeter-thick cable, consisting of three copper phases for power and one bundle of fibre optic cables for data transmission, embedded itself into the trench due to its high weight (about 15 kg per metre). The trench was filled in through water pressure. Klaus Lewandowski, Network Manager of E.ON Hanse AG, explains the advantages of the cable, “The submarine cable with a weight of approximately 800 tons was produced in one piece by Norddeutsche Seekabelwerke Company. This eliminates the spigot-and-socket joints under water that are more prone to defects.”

In other regions of the earth, mainly for telecommunications connections between Europe and the USA and the cables in Southeast Asia, more and better cables are in demand. The first functioning transatlantic cable – for the transmission of telegraphy signals – was produced in 1858 from copper wires with insulating layers made of gutta-percha. Thanks to amplifiers, the first telephone conversations between Europe and America could take place starting in 1956. In 1988, the first transatlantic fibre optics cable was put into operation. It quickly overtook the copper cable as standard material. Today, the length of the worldwide network stretches across more than 300,000 kilometres. Some cables connect only two countries, while others transport data between several continents. More than 90 percent of the telephone and Internet traffic runs through them.

The standard for the worldwide network are optical fibres that transport data as light pulses almost at the speed of light. The individual optic fibres measure only about one third of the diameter of a human hair. Large transmission capacities are possible because the signals produced by lasers are transmitted simultaneously through the fibres by several close wavelengths of light. Nowadays, data transmission rates of 160 gigabits per second per fibre optics pair are normal. The latest transatlantic cable, TAT-14, can simultaneously transmit 15 million telephone conversations, or the contents of 250 DVDs, per second. 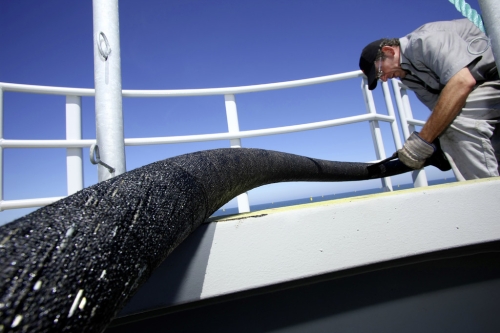 TAT-14 consists of two five-centimetre-thick cable looms. They cross the Atlantic on different paths in order to lower the chance of interference. Although they are laid in well-dug trenches and are well protected, submarine cables are not immune to damage. The most hazardous area is close to shore, where drag nets and ship anchors often accidentally cut the cables. Some cables have also been damaged by marine earthquakes. In addition, there are ocean currents and shifting sand banks that can rip the cables. Even mussels, worms and larger fish can render a cable useless. In 1986, a repair ship lifted a cable from more than 1,000 m depth between the islands of Tenerife and Gran Canaria. In its polymer protective cover were 50 shark teeth. Ever since then, cables are protected with a metal sheath.

As recently as last year, a cable broke – during the soccer world championship in South Africa, of all things. Damage to a submarine cable between Mumbai in India and Mombasa in Kenya resulted in a power breakdown for many fans and reporters. Internet users in Vietnam are also complaining about weak data connections. Here, thieves had stolen an 11-kilometre-long fibre optics cable from the ocean that transmitted more than 80 percent of all Vietnamese telephone conversations and Internet connections. It is likely that the thieves sold the fibreglass to scrap dealers.

In 2007, Global Marines Systems counted about 50 failures. The search for defects is particularly difficult with buried cables. Remotely controlled submarines follow the cable trench until they have found the damaged section. In order to fix the cable, it is gripped with a hook and lifted to the deck of a repair ship. Sometimes, the cable is not torn or damaged, but rather booster amplifiers need to be replaced that continuously amplify the signals on their journey over thousands of kilometres.

The cables are monitored by international monitoring stations, for example the Competence Center Submarine Cables in the East Frisian coastal city of Norden. Here, more than 40 employees monitor ten of the most important submarine cables. If the connection is broken, an alarm sounds. Within an hour, the data must be detoured to other cables in order to keep the traffic jam in the data transit as light as possible. The defect is localised, and a repair ship must be on the way within 24 hours. A new piece is inserted into the damaged section. The fibreglass strands are heated with an arc welding machine and then connected seamlessly. Repair can take several weeks, and the affected parties have to deal with very slow Internet connections.

The submarine infrastructure is being expanded continuously. In 2008, the first direct broadband connection between China and the USA was finished. The Mediterranean Island of Sardinia is now connected to the mainland by a submarine high-voltage cable. Soon, a second DC-connection is to be installed between Finland and Estonia, and the same goes for Malta and Sicily. Africa is being connected as well: As of last year, an approximately 10,000-kilometre-long submarine cable that stretches from South Africa to Sudan with onshore stations in Madagascar, Mozambique, Tanzania, Kenya, Somalia, Djibouti and the Comoros has been completed. It offers access to Internet and telephone to 250 million people.

Even in the age of satellites, submarine cables are still indispensable. They are faster, process more data and last longer than satellites. In addition: Despite the higher complexity during installation, they are still cheaper.

A map of the submarine cables all over the world:
submarinecablemap.com