Topic of the month February 2011 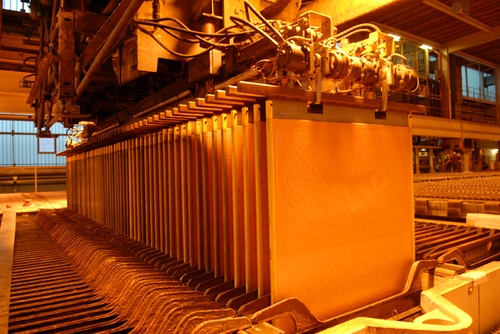 Picture 1: A copper cathode is lifted out of electrolysis bath in an Aurubis plant. The company produces almost 600.000 tonnes of copper cathodes per year. (Aurubis Press foto)

The German Railways have been stolen overhead contact lines and telecommunication wires worth 15 million euros until the end of last October, as the German newspaper Die Welt reported. Probable reason for these thefts: the copper inside the lines. This is not surprising, the resource is as expensive as never before. The price for a tonne was 9700 Dollar in the middle of January 2011, for comparison: Two years ago the price was about 3300 Dollar.

The driving force behind this rise in the market, was – besides usual speculation – the worldwide demand for copper. According to Wolfgang Reitz from the German Fachverband Kabel und isolierte Drähte copper is still a very important raw material, which we come across permanently in everyday life: “You find copper in every appliance and power cable at home.” In addtion 90 per cent of the wires and cables used in cars are made of copper. The rally of the car industries is one of three reasons for the increasing demand and the rise of the prices. The other two are the upgrading of power networks and the effects of “ongoing industrialisation”, which becomes noticeable on a small scale as well says Reitz: “Every household has its own grid and therefore needs wires and cables.”

Picture 2: Drilling site at the deposit closed to Spremberg. Copper ore should be digged here in 2017 at the latest. (Copyright KSL Kupferschiefer Lausitz GmbH)

In 2010 about 1.3 million copper cathodes were needed in Germany, says Aurubis spokeswomen Michaela Hessling. At the moment the company is the biggest copper producer in Europe. It converts copper concentrate, scrap copper and recycling material into semi-finished products as for example continuous cast copper rod, which is delivered to the cable and wire industry. According to Hessling the electric and electronics industry is the major customer of copper produced at Aurubis. About 70 per cent of the copper produced all over the world is used in the cable and wire industry she says. The Deutsche Kupferinstitute, a technical and scientific information centre of the copper industry, verifies these date widely. In Germany three-fifth of all used copper flows into the electrical industry, explains spokeswoman Birgit Schmitz. Half of this amount is used for the production of cables.

In spite of the rise in prices during the last years Aurubis has not experienced a fall in demand. One reason for that is probably the fact, that copper can hardly be substituted, explains Michaela Hessling. The conductivity of aluminium, which is cheaper, is not as good as that of copper: “You would need a bigger cross section of the cable to transport the same amount of energy”, says Hessling. Because of this, aluminium is mainly used for transmission lines. Only silver would have a conductivity as good as that of copper, but is much more expensive. Substitution effects are constrained to non-electrical objects as for example sanitary installations. For the transmission of electricity copper remains the measure of all things.

Picture 3: Drilling tower at the deposit closed to Spremberg. Copper ore should be digged here in 2017 at the latest. (Copyright KSL Kupferschiefer Lausitz GmbH)

As with many other resources Germany and Europe do not have much copper. 800.000 tonnes of copper cathodes have to be imported in Germany each year, this corresponds to 62 per cent of the composite demand. The majority comes from South America, says Aurubis-spokeswoman Hessling. The company itself produces almost 600.000 tonnes copper cathodes per year. The needed copper concentrate is either recovered from recycling material or ordered from mines all over the world. But hardly from Europe. In Europe only one mine has economic significance. According to the operating company KGMH the mine in Polkowice produced about 29.7 million tonnes of copper ore with a copper content of 1.7 per cent in 2009.

The Polish mine could get company soon. Not later than 2017 copper should be dug closed to Spremberg in Brandenburg. At least, this is the aim of the Kupferschiefer Lausitz (KSL) GmbH. According to its general manager Thomas Lautsch there are about 200 million tonnes of copper ore in the deposit Spremberg and Graustein. The copper content amounts one to two per cent. That means there will be between two and four million tonnes of copper concentrate after preparation and smelting. This spring there will be seismic prospections, says Lautsch. Detailed figures about the subsoil should be available this autumn. With the help of this information, the company wants to locate the optimal position for the two shafts for the mine. As of 2013 the mine should be built, the extraction of copper should start four years later.

Aurubis-spokeswoman Hessling is delighted about the project itself but sceptical about its importance. “Generally, we are happy about every source in Germany. But it remains to be seen, to whom the copper will be sold and how much will eventually be dug.” The total amount of the deposit in Spremberg – two to four million tonnes copper concentrate – would meet the annual demand of Aurubis (600.000 tonnes) only three and a half till seven years at the most. And that only, if every gramme would be delivered to Aurubis. In addition the project is risky says Hessling. Mining is a very expensive venture and needs high commoditiy prices: “The project lives and dies with a high copper price.” Anyway Aurubis is in contact with KSL, Hessling assures.

So it is an uncertain enterprise and maybe not more than a drop in the ocean. Anyway, every tonne of raw material , which is dug and processed in Germany reduces the dependence on import. Beyond that, it is important to use the technical progress and to recycle material. That is, what also Michaela Hessling recommends: “The biggest European copper source is recycling.”